Richard Fitoussi was the CEO and Founder of the Cambodian Landmine Museum Relief Fund, which raised the money to build the current Cambodian Landmine Museum and Relief Center in Banteay Srey Cambodia. He has been involved with landmine clearance, victim relief, international awareness, and numerous fundraising programs since establishing the CLMMRF in 2001. After meeting Aki Ra, Richard promised to help him build a new Landmine Museum.  He established the Cambodian Landmine Museum Relief Fund and raised the money from donors across the globe to build the current facility. It opened in April of 2007, replacing Aki Ra’s original compound. Richard is also the producer of the award winning documentary about Aki Ra, The Perfect Soldier. He currently resides in Toronto, Canada and is working on new projects.

Aki Ra is an internationally recognized figure who has dedicated his life to making Cambodia, his native land, safe from the ravages of landmines. Born in 1970, and taken from his family by the Khmer Rouge at the age of 5, he fought for the many different armies that ravaged Cambodia for nearly 35 years. In the early 1990’s he went to work for the UN clearing landmines around Angkor Wat. He decided that demining would become his trade and returned to the villages where he had fought, removing landmines that were killing and maiming his fellow Khmers. His Cambodian Landmine Museum and Relief Center, established in 2007, cares for dozens of at risk children.  They are housed, cared for, and educated. Today he runs a demining NGO called Cambodian Self Help Demining. Along with the other demining NGOs in the country, he is making his country safe for his people. As of 2018, his team has cleared over 155 minefields in small villages and put over 36,000 people back on land that was, in every sense of the word, killing them. In 2010, he was named a CNN Top 10 Hero out of 10,000 nominees. In 2010, a movie, A Perfect Soldier, was made about his life. In 2012, he was a recipient of the Manhae Prize, by the Manhae Foundation in Korea. Today his two NGOs, The Cambodian Landmine Museum and Cambodian Self Help Demining, are recognized around the world as examples of what one person can accomplish, regardless of the circumstances of their birth. 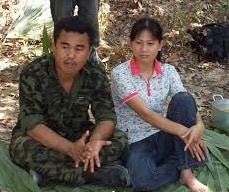 Hourt and Aki Ra were married in 2000.  She met him while a student in school visiting the museum.  Together they founded Aki Ra’s demining team, Cambodian Self Help Demining. Hourt was the manager and director of the Landmine Museum. Hourt died in April of 2009 after a brief illness.